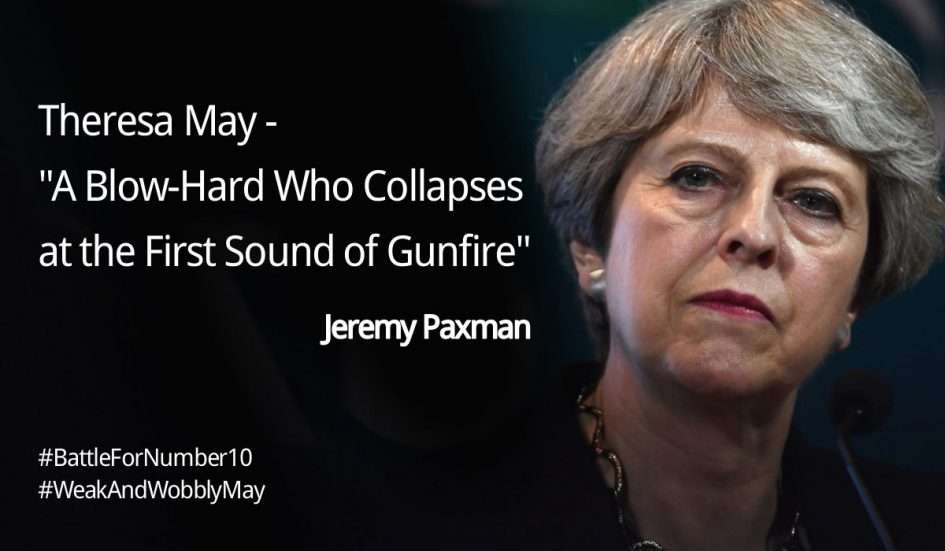 The 1st responsibility of government is protecting its citizens from violence. Theresa May and the Tory party, in their desperation to hold onto power, have chosen to put their own self-interest ahead of that prime duty. Apparently, it is party 1st and country 2nd.

To cling to power, they are willing to put at risk nearly 20 years of Irish peace that took 30 years to achieve, by inviting the Democratic Unionist Party (DUP) to create a minority government. For those too young to remember or who have only ever known a peaceful Ireland here’s a quick summary from the BBC (there’s a video and more good information, 5 mins of your time would be well spent checking it out – having to use the Web Archive as the BBC has messed up it’s links):

The conflict in Northern Ireland during the late 20th century is known as the Troubles. Over 3,600 people were killed and thousands more injured.

Over the course of three decades, violence on the streets of Northern Ireland was commonplace and spilled over into Great Britain, the Republic of Ireland and as far afield as Gibraltar.

Several attempts to find a political solution failed until the Good Friday Agreement, which restored self-government to Northern Ireland and brought an end to the Troubles.

(It is important to note that the DUP was the only major political group in Northern Ireland to oppose the Good Friday Agreement.)

Irish politics is complicated, but, in brief, up to last year, there was a power-sharing executive in place that governed Northern Ireland in devolved matters. The 2 largest and dominant parties in this were the DUP and Sinn Féin. During 2016, Arlene Foster (DUP leader and serving First Minister), faced accusations of mishandling over a renewable energy scheme (cash for ash) which overpaid businesses for using green heating systems and cost taxpayers more than £490 million.

Sinn Féin made repeated calls during 2016 for Foster to step aside from her First Minister role while an investigation was / is carried out into the scheme. She refused; and so, in January 2017, Sinn Féin collapsed the devolved government in a move to force Foster out. Five months on and the Northern Ireland government has yet to be reconvened. As in nature, politics abhors a vacuum; The longer this goes on for, the more unstable things will get.

Before the UK election, the Tory government had been mediating talks between both the DUP and Sinn Féin to get the power-sharing executive restored. To be a fair and trusted mediator between 2 or more parties one has to be independent of all parties. The British government was neutral between unionists and nationalists, but now Theresa May and the Tory government are set to blow that convention apart and get into bed with the DUP. How can they still act as an independent mediator when the DUP have them on a leash? I am sure that Irish peace does matter to Theresa May and her cohorts, I’m just not sure how much.

So, how will the relationship with the DUP work? We are told that it will not be a binding coalition agreement where both parties come together and govern for the duration of Parliament; unsurprising given the Liberal Democrats’ recent experience with the Tories. Instead, Theresa May is seeking a confidence and supply agreement. This means the DUP would back the Government on confidence votes and budget or supply votes, avoiding motions of no confidence. However, unlike a coalition, the agreement is not binding, and “confidence” could be withdrawn by the DUP whenever they choose.

For the Tory government such a deal means they won’t face defeat at every vote, but what does it mean for the DUP? The DUP likely believes in a supply & demand arrangement, i.e. they supply votes and demand what they like. Yes, it is that bad: the DUP would have the whip hand. For every vote Theresa May wants to win, she will have to go cap in hand begging for their support.

What will the DUP ask for? Well, they have, let me put this diplomatically, some non-mainstream views: they are opposed to abortion being legal, gay marriage and LGBT+ rights and have a track record of climate change denial. Perhaps they will want some policy changes around those areas, or maybe they will just want extra cash (£ millions) for their own political projects. The worst thing that they could seek is an advantage in what should be neutral negotiations conducted by the Tory government in resurrecting the Good Friday power-sharing executive. What we can be sure of is that we won’t get to know all the details of a deal agreed somewhere in a grubby Tory backroom.

The reason Theresa May is hurrying to cobble together a weak and wobbly minority government is that otherwise, she would have to allow Labour, as the main opposition, a chance to form a working government. If they could not, then we would have another general election.

In normal times, having taken a 20 point poll lead and a majority of 12 MPs and converted that into -5 points and the loss of 13 MPs, any leader would have been eviscerated by their party. The only reason the Tories are not in the full regicide mode, for which they are famous, is that they know they would not only lose an election but would now likely be decimated. We know this as nearly all their MPs are droning on about how we need a period of stability, cannot waste any time given Brexit, and how the British people are tired of elections. Rubbish.

It is not that we want another general election; it’s that we need one because we have a hung Parliament with no majority, no mandate and have to deal with Brexit, the biggest UK challenge since WWII.

Theresa May told us and the World that she was calling the election as it was necessary to prevent Corbyn and the dreaded Labour party from scuppering her Brexit plans and to strengthen her hand in negotiations with the EU. To which the country united and gave her a bloody nose.

May is too weak to deliver the best Brexit this country deserves and people across the UK will wonder without an election mandate what right does she, the Tory party and the DUP have to decide on the fate of us all. For the good of the country, she should immediately relinquish government responsibility for EU Brexit negotiations to a cross-party Parliamentary committee or ask the EU to allow us to delay the start of talks and call a general election now.

Theresa May will not be leading the Tory party into another election. If she doesn’t get a deal in place with the DUP, she might not even make it to the end of the month. She is Tory party leader in name only, doing as the men in grey suits tell her. Perhaps they will take pity on her and allow her to leave with whatever is left of her tarnished and tattered dignity before the Tory conference in October. Regardless, she will be gone soon enough, a footnote in history as the shortest-serving Prime Minister since 1762 who did not have to call an election, but foolishly did; and her epitaph will read “not strong nor stable”.

We will have another general election before 2022: it could be before the end of this year, or it might be the next. The Tory party will hold off having an election for as long as possible because the youth of the country have woken up. Many new young voters have tasted the power they have to affect change and found it to be intoxicating. They will be persuading their friends and family of a similar age to do the same and imploring their parents and grandparents to consider their futures when voting. There’s an East wind coming…

Note: I have deliberately not touched on the terrorist histories of the DUP or Sinn Féin. They both have dubious pasts, but part of the price of peace is to forgive, though not forget, and move on to a brighter and better future.

Get to know your MP and tell them what you want: they work for you.